Behind the Blog# 4: The good old letters 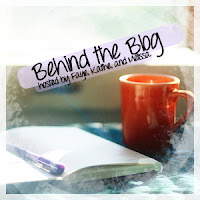 Behind the Blog is a meme to help bloggers connect their life and interests to the content showcased on their blog. The co-hosts, Faye, Kathe, and Melissa will provide a different topic, idea, or question every week that bloggers can relate to themselves and the books, films, or other media they find interesting!
Our theme this week is Snail Mail.  In the  age of instant gratification, technology is everywhere. Through Twitter, Facebook, and email, we’re always connected. As an unfortunate result, letter writing seems to have become a dying art. Even so, the thrill of getting a letter or card in the mail from a dear friend never seems to diminish. Do you like to write letters, or do you prefer email or social media sites? Have you ever been part of a pen pal program? Book related questions: What are some books you’ve read and enjoyed that have letter writing as a key component? What about some films? Do you ever take part in bookswaps? (They’re like a pen pal program but with books!)

Even though I’m an ancient-stuff-loving person, I moved onto e-mailing and using the internet for conversations as soon as I discovered it, primarily because of its simplicity and ease. It wasn’t before I really thought about it, thanks to this week’s topic, that I realized how much I missed the old handwritten letters. The thrill of seeing your name on the envelope, trying to identify the sender from the way it’s been packed or from the color/style of envelope and finally reading the note. When it’s a letter from a friend or a relative who lives far away, you really see the handwriting apart from the words, the way the alphabets are written and it gives you a sense of their personality and probably the timing of the letter. It tells you more about the sender than those words do and I love that aspect.

Though now it’s all changed. I haven’t seen a postman regularly here since so many years. I don’t even see many postboxes anymore and the memories I have of the khaki wearing postman date a long time back to when I was very small. While I was asking my dad about this, about how it has changed so much, he pointed out to me that it’s really here, in our state or maybe the country where it’s diminishing so fast! He said it’s used a lot in foreign countries and I guess he’s right because now that I remember, I’ve read about postmen carrying letters in many books. Apart from this, people here prefer to use internet for everything. While I love the internet for many reasons, I somehow want to preserve a few things to do personally, rather than virtually. For instance, I’m not a fan of online shopping (except books, because the ones I want are usually not in the nearby bookstores) or google searching for every single thing. Diverting a little from the topic, I feel I’m doing something wrong to myself if I’m searching on Google for almost everything I need to know. There are many things we already don’t know and it’s a great tool for that. But if we have, suppose, a topic to write on for homework, shouldn’t we do it ourselves? Google searching for facts is alright, but plagiarism, or copying lines from the net are unacceptable for me. I feel I’m undermining my own intelligence if I’m not even using my brain for simple things. Really, there may come a time when we would forget how to think and solve problems!

Anyway, back to the topic. I was fascinated with the details dad gave me, about the past when he was a kid. The postman visited thrice a day, everyday. And letters were expected from friends and relatives, so people used to eagerly wait for the postman to arrive at their gates. Sigh, I just love the sound of the good old days when I wasn’t born. I would trade anything to go back and live that life. Not that I hate this one, I’m very happy with whatever I have, just that the old one seems to be everything I would have enjoyed (more details would be a huge deviation, so I’ll keep that for a separate post!). Now there’re just a couple of fixed occasions when we’re sure to receive a post. Once on Raksha Bandhan, a festival when my dad’s oldest sister sends him a letter and rakhi, then Christmas and New year cards from relatives in the US. And sometimes during Diwali. As far as writing to loved ones is concerned, that’s about it.

Even when it comes to writing, I’ve written down so much in the past, in the fancy notebooks I especially bought to write, different ones for different purposes. I still follow the same practice, though now if I have to write on a topic, I will most probably use the PC/Laptop because it helps to write faster. I don’t have the speed in my handwriting that matches the speed of my thoughts and so I miss out on things. That’s the reason I use MS word! But, for other stuff, like reminders and little notes, I use the old methods, even for recording birthdays. As weird it may seem, I’m afraid using technology all the time would cripple my basic senses! That’s the way I feel.

I’ve delayed writing this week’s BTB post because I was feeling kind of guilty. I know how much an effect a handwritten note can have, have always known, but still hadn’t thought about reverting back to those practices. Even when I receive a book by post, I love the feel of holding the package and tearing it open to reveal its content(s). Then why hadn’t I ever thought of writing a letter to those with whom I communicate once in a while, instead of e-mailing? But now I know better. I needed a gentle reminder which came in the form of this topic and I am truly inspired by the hosts’ BTB posts that say they still do that. Thank you Kathe, Faye, Melissa for this awesome topic! :D
Behind the Blog letters Weekly meme