on March 04, 2012
In My Mailbox is a feature hosted by Kristi at The Story Siren, as a way to blog about the books you've received over the week. So many book bloggers (about 200, to be precise) participate in this feature and fascinated by it, I thought I'll post my own IMM too!

A rather hurried (and harried) trip to the 20th World Book Fair at Delhi added a few books to the pile, though they're not new releases. The kind of books that are popular and those I hadn't a chance to read yet! I had initially planned on making another trip, but thanks to exams (just a week ahead), I'm sitting here, blogging about it instead of being there, grabbing books (and discounts!).

Anyway, I have these particular four recent purchases- three from the Book Fair and one from Flipkart. 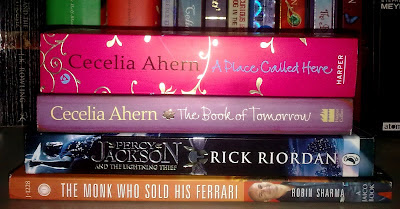 A Place Called Here and The Book of Tomorrow by Cecelia Ahern- Attractive covers and bestselling status automatically act as motivators! Besides, when people know so much about some particular books and I don't, it kills me, hence the purchases!

Percy Jackson and The Lightning Thief by Rick Riordan- I should have read this a long time ago. It's about a young teenage boy who finds out his normal life isn't that normal after all, and he's the son of Zeus! Based on Greek mythology, this book's been made into a movie as well (in fact, I saw the movie and then came to know about the book!). Plus it always feels good to read young teen reads every once in a while. :)

The Monk Who Sold His Ferrari by Robin Sharma- Motivational book about finding inner peace, knowing yourself and achieving your dreams, in the self-help category, appealed to me when readers praised Robin Sharma's books a lot! Hence, I ordered it from Flipkart!

I got a few more books from the Sunday book market at Daryaganj, Delhi (where they mostly sell books second hand at dirt cheap prices, but if you dig a bit, you can find out awesome bargains). There I picked up books for light reads (some light mysteries, a couple of books by Jeffery Archer, and some chick-lit). Another trip to the place is due (and to the library too), which will take place after two weeks (thank you exams).

I will be away from the blogosphere for a couple of weeks, again, thanks to exams, so won't be posting here before 18th of March! Though, knowing me, I guess I'll put up a random post on my other blog whenever I feel like it, because well, that's what I mostly do there!

PS- (I would like to check out your IMM. If you have one for this week, please leave a link!)
IMM Weekly meme