I read this book less than a month ago, for the first time. Even though it was hugely popular a few of years back, when the first movie was released, I hadn't picked it up-mostly because I have a strange aversion to hyped-about things and because vampires were something I wasn't interested in. Ever.
My view however, hasn't much changed, even after reading the book. Based on the secret life of vampires in some towns in America, Twilight is the story of a human girl, Isabella Swan stumbling upon the mysteries of these 'secret' vampires.

Storyline
Bella's mom remarried and wanted to move to another town with her new husband. Seventeen year old Bella decides to stay with her father, Charlie in the cold town of Forks, a place she never liked to be, mostly because of its lack of sunlight, continuous rainfall, excess greens and forests. It was a place she found depressing and desolate, but she decides to go there anyway, for her mom's sake. Charlie gets her an old truck and she begins her new school, always wanting to be ignored. Kids at school however, knew her by name and took an interest in her, Forks being such a small town that everyone knew everyone!

Sitting among the chattering group in the cafeteria on the first day, she notices a strange but extremely beautiful group of people, sitting silently, not touching their food. She's told it's the Cullens, who stay with their own family and hardly interact with others. She's fascinated by the elegant and smooth skin emanating a unique radiance and feels attached to them somehow, especially the youngest of them, Edward. However, Edward stares angrily at her and keeps his distance on the first day, much to Bella's surprise. But after a week he starts chatting normally and tries to interact. They become friends and Bella finds herself looking forward to school everyday. Forks doesn't seem boring anymore! 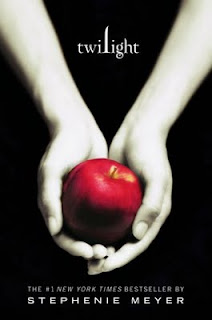 Some of Edward's activities perplex Bella, such as his speed, his aversion to blood and how they (the Cullens) never seem to eat. Charlie's got an old friend, Billy who sees them together and asks his son, Jacob to warn Bella to stay away from Edward. All this leads her to dwell on the mystery and she makes a guess- they are vampires. When she confronts Edward, he admits it to be the truth and tells her how they are trying to live a 'normal' life. They don't hunt humans, but animals, and it's a very unique and different thing about his family (which is actually not a real family, but kind of vampire parents with foster-vampire-kids!).

It gets interesting where another vampire family visits the Cullens and one of them is a tracker. That's when the book picks up pace, since the tracker's after Bella and the Cullens set out a plan to save her. There's a race and everything happens with surprising speed. That's what put a smile on my face! Finally, some ACTION! The tracker however, tricks Bella and attacks her, but she's saved by Edward and Carlisle (Edward's 'dad' and a good-doctor-vampire).

My take
Bella seems to be a person without many feelings and her acceptance of every weird characteristic of Edward (which would make any normal person feel scared) as if it's an everyday thing, didn't make me happy. Not much. Maybe because I'm someone with an overflowing pot of emotions, having a view and thought for everything from people to soap, I found it rather depressing. Not having many feelings, I mean. But maybe that's what fascinates Edward, that despite knowing the truth she doesn't run away! Another thing I didn't enjoy much was the way Bella seemed casual about lying to her dad almost all the time! I mean, it's a story, but doesn't it give out a wrong message?

The descriptions however are beautifully done, so much that one can create and visualize the whole scenes as if it's a movie running in your head, which is an exceptional thing in itself. I love such books, that have the ability to transfer you to a completely different fantasy world while you're stuck to its pages.

Overall, I enjoyed reading it, but there were parts where I felt irritated with the ridiculousness of it all. It isn't a hard core vampire story, not the scary stuff about them we read as kids, but the words sure don't fail to create a nervous lurch in your stomach. I don't know why it's compared to the Harry Potter series; HP is way better! But still, it isn't a job badly done. It's succeeded in grabbing a vast share of readers and followers and is an International Bestseller! I would read this book again- once. Or maybe twice. But that's it.

Recommended for teens, but if you're looking for a vampire story, back out! It's more of a YA love story.