The Lovely Bones by Alice Sebold

Blurb
The Lovely Bones is the story of a family devastated by a gruesome murder -- a murder recounted by the teenage victim. Upsetting, you say? Remarkably, first-time novelist Alice Sebold takes this difficult material and delivers a compelling and accomplished exploration of a fractured family's need for peace and closure.

My Thoughts!
I had encountered this title in way too many lists (which I keep looking up from time to time) to feel like reading it. Yes, I'm among those who get wary of a book when it's being praised too much. Not without good reason, too. Although The Lovely Bones was not really disappointing, it was surely lower than what I'd expected out of it.

The story is narrated by a fourteen year old girl who's dead. That's probably one of the reasons I found this interesting. Susie Salmon ("like the fish", as she says) is the eldest sibling in the Salmon family. One late evening as she's returning home, she encounters Mr Harvey, a man in their neighbourhood, who rapes and then brutally murders her. Susie dies and goes to heaven, which is different for different people. Susie's is like high school but there are no teachers and she can do all she wants. There's another girl named Holly and a mother-figure named Frannie she meets up there, but she can never stop gazing at her family and friends on Earth. Fair enough, because that is how she will tell us the story.

Soon after Susie's death, we see the devastated family trying to accept the fact that she's dead, and murdered. The story revolves around the lives of people after Susie's death. The writing is good, for the author is able to make a reader feel the intense rawness of feelings one goes through after a tragedy. Susie's father, who I think is the best character in this story, meets Mr Harvey and, just because he's too numb to think of much else, helps him build a tent in his (Harvey's) front yard. BUT. In some sort of instinct, he begins to feel something's wrong... the man knew something about Susie. Of course the clever Harvey denies it and goes back to claiming his lonely life (no wife, no kids) for having weird hobbies, but that only cements Mr Salmon's suspicion that Harvey killed his daughter. This part of the book was really interesting, because I began to feel that he'd do something rad and would get Harvey caught (Harvey being a psycho and having killed children and women before as well). However, despite his conviction, Mr Salmon is not able to prove it. Len Fenerman, a detective, does what he can (almost) but he has no ground to suspect Harvey. Mr Salmon is left alone. Lindsey is the only one who believes him, and tries to help him out.

There are a bunch of other characters who form a good part of the story. Ray Singh, Susie's schoolmate who had a crush on her, and Ruth Connors, an artistic person who was widely considered weird in school. Ruth has been used to depict one form of 'meeting point' between the living and the dead, which was an interesting element in the story. 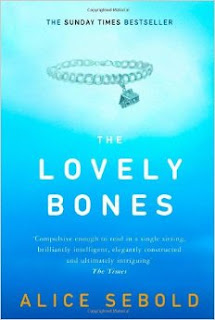 The Lovely Bones has potential, and I can see why it became popular when it first came out. It promises so much! I found it emotional, and something that offered a view of reality--that there could be disappointments and you can be wronged even when you've done nothing, and it's not necessary you'd get redemption. Some people can go unpunished even after committing sins. Tragedy can break families, and it is oh-so-difficult to keep it together. I also found it heartbreaking. It tells how different people cope with loss in their own ways. Since it can turn out to be high on the emotional quotient for some, maybe you wouldn't want to read it if you're anyway feeling sad or low. As for plot... I don't think there's much to go on. Susie sees her loved ones doing things she is missing, sees them growing up and learning to live without her, makes some connections, but it's just that. It could have had some exciting passages about the killer, but there are few, and not very exciting.

The writing was engaging and gripping, and no matter what you feel while reading, you'd want to keep reading it. Some characters (read Mr Salmon) are believable and lovable. Sometimes you read things so utterly beautiful and painful, you can't help but love the book!

But to be fair, I did find some things quite disappointing. I did not get some parts about Ruth and her abstract ideas, connections and thoughts. I think I can attribute it to some lack of understanding on my part. Second, I did not like Susie's mother, and it's not only because of what she did (it's a spoiler, so I'm not mentioning it), but also because--what an escapist! Sure, I can't imagine a person facing such a tragedy, but woman, you can't do all those things and not do important things (also a spoiler!). Another thing that seemed overdone was how almost all characters engaged in physical relationships to forget their sadness. Like there's nothing else that can make a person feel better. It really annoyed me. It's not only because I have differing personal views, but what sort of messages are being sent to the readers? Finally, the ending. Had it not been for the messed up ending, I might not even have thought of the other 'disappointments'. WHY did that have to happen? I wouldn't like to mention it because it'd be a spoiler (bah), but it was not good.

Still, every reader experiences a book differently. It is surely worth a read if you're looking for something emotional or different. Just don't expect too much. If you don't, you might end up liking it more than I did!

Here are some quotes from the book for you:

“Nothing is ever certain.” (The most-quoted line in the book)

“Murderers are not monsters, they're men. And that's the most frightening thing about them.”

“Between a man and a woman there was always one person who was stronger than the other one. That doesn’t mean the weaker one doesn’t love the stronger.”    (What do you think about this one?)

“You look invincible,' my mother said one night.
I loved these times, when we seemed to feel the same thing. I turned to her, wrapped in my thin gown, and said:
I am.”
(Honestly, this one broke my heart)