Review: The Footprints of Partition by Anam Zakaria

on November 12, 2015
Title: The Footprints of Partition: Narratives of Four Generations of Pakistanis and Indians
Author: Anam Zakaria
Published: 2015 by HarperCollins Publishers
Pages: 248
Find it at: Flipkart / Amazon

What is this book about?
A researcher (and development professional and educationist) based in Pakistan has collected stories from different generations of Pakistanis and Indians on the theme of Partition (of 1947), with the purpose of understanding how people from different generations feel about that defining event. Perhaps one of the most important ideas this book tries to portray is the 'happy' stories related to Partition. The happy aspects of life before and after Partition are often overlooked because for most people, 'Partition' relates to an experience or belief that is not positive; one that brings memories of pain, torture and sadness, so much so that the first thing that occurs to anyone who thinks about Partition is the negativity surrounding it.

My thoughts
I wanted to read this book as soon as I got wind of its existence. I had never read Partition stories before, but had heard real life stories narrated by my grandma many years ago. She was a Partition survivor, someone who left her home and all belongings to travel in an overstuffed train to a 'safer' land. Reading this book, I realized that the village she lived in was the first where the riots began, which accelerated and acted as a harbinger for Partition.

Reading The Footprints of Partition  was an emotional experience, and also one that widened my perspective. Having been brought up in India with no contact with anyone from the 'other' side, I had learned to perceive Pakistan and Partition in a certain way, not realizing what the people being brought up in Pakistan thought about India. Sure, the two countries have always been at loggerheads with each other, specially during cricket, the sport Indians and Pakistanis literally worship. However, as I grew older and made sense of people and the world, a lot of prejudice and biases came to an end. After all, my grandma did tell me the good stories too, even if they were few. Even then, reading something on a topic we feel so emotional about, written by a person whose thoughts and experiences related to the 'other' side, was a real eye-opener to how little we know of each other.

To begin with, the book makes you look at Partition in an entirely different way. First, it talks about real people and the effect of Partition on their lives. There's nothing political in it. What did the people want? Why were they rooting (or not) for Partition? We see how millions on both sides of the border lost not just their loved ones or their jobs or their land, but also had their hearts and souls tested severely. Next, we (in India) have mostly looked at Partition that led to a loss - of homes, families, cities. It 'broke' India. We 'lost' something of 'us'. Little do we realize what Partition meant to those who wanted it. That was an entirely new thing for me! 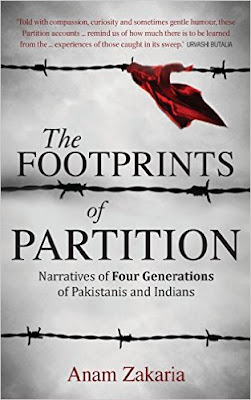 The author has travelled and met people from four different generations--some popular, some as common as you and I--mostly in Pakistan but also some in India. She probed them with questions about Partition. As you'd expect, the people who had lived to see it had the most heart-warming stories to narrate. It took some time to make them remember the good parts, but once they recalled how happy they had been, it had led to a treasure trove of wonderful, emotional stories. Talking to people who were forced to take an Indian citizenship due to circumstances, to people who left half of their families behind to be in Pakistan, the book talks about them all. We get a glimpse into the multicultural dynamics of the pre-Partition years, the cultural and religious identities which were overlapping instead of being so different.

Footprints of Partition is divided into four sections, one for each generation. Reading people's stories in this sequence does more than give the book a structure--it subtly shows the changed mindset and development of the Partition idea over the years. Surprisingly, the current generations seem to harbour more hatred for the 'other' nation than the people who actually experienced the horrific time and events. The author has also tried to analyze why it is so. It came to her as she started working with CAP (Citizens Archive of Pakistan) and spearheaded programs to allow the younger generations to exchange their views and become friends. The animosity between many kids was startling. Their perspective mixed with a deep-rooted fear of the others was even more so. The book also talks about certain aspects that facilitate feelings of enmity, including select curriculum taught in schools, sharing of only gruesome stories when it comes to Partition, and the leaders who are quick to reiterate the horrors of the past to justify the one-sided view of the 'enemy'.

There's a lot more than that which is uncovered, a lot of love that is dying because people carrying that love are dying and the newer ones are just taking forward a narrow perspective. Anam Zakaria, with this book, has tried to immortalize (as much as words can do) some stories that must not die. I'm sure there must be many more such stories that have remained unheard, specially as today we move so fast that we do not really care to listen to those stories, or to find them. Personally, I feel glad and thankful that someone cared enough to write and share those stories.

I haven't got into details about the stories per se. They're varied, ranging from someone looking across the border hoping to find a loved one, to someone breaking down for not being able to see his hometown except from inside a running bus. I can only imagine the level of emotional connect people have with Partition. Growing up, I wished it had never taken place, that we were all still together, and reading this book made me wish for the same, although it also made me think of the 'whys' which I hadn't thought of before. It's complex, but hugely satisfying if you are interested in Partition stories. The author also talks about traditions that still run and at their minimal best, try to keep something 'common' between the two. One such amazing mention was that of a 'mela' that takes place each year in Sawan season. It happens right on the border, with people coming from both sides to pray and celebrate, together. Such, and other, melas (like one at Baisakhi) take place along the border at different places with people coming in from both sides and happily greeting each other. Doesn't it sound surreal?

The manner of writing is definitely engaging, where you also see the storytellers' life's direction as it was affected by Partition. The language used is simple and lively. I absolutely love the author's honesty as an observer of what she and others felt and what she came across while working on the project. I only wish the author hadn't put in much of her own experiences of being a part of CAP or other things, because after a point, it seemed repetitive and broke the flow. Also, as the author also mentioned in the book, the stories were brought out not only to share but also to see how people 'chose' to remember. Perhaps it still doesn't offer a very wide view, as the people interviewed were largely from select few places, but it does make a difference. I was left feeling much humbled and with a much wider perspective when it comes to Partition. Like some new generation storytellers mentioned in the book, even I wish to some day travel to my grandparents' home towns to see what became of them, but again, I know almost nothing about those places, and know no people. Still, the desire to walk around and visit the 'other' side stays strong, and I hope to be able to accomplish it some day. Then perhaps I would finally feel like my own Partition story is at a comfortable close.

(This also makes me think how "important" such stories are, how their preservation is necessary to be able to allow the newer generations to have a wider perspective and not one dictated by propaganda and public opinion. Mutual feelings of distrust only get stronger, and we need something to bridge that gap, or the real history will elude us forever.)

Recommended for: All Indian and Pakistani readers, anyone interested in history and Partition, readers trying to understand the effects of Partition on the common man.