Book Talk: Across Many Mountains by Yangzom Brauen

There was very little about Tibet that I had known until a few weeks ago. It’s strange how little we really see in the world around us, even when we’re surrounded by so many things, each a different story. I’ve come across people originally from Tibet in my own city, but apart from the fact that they were refugees, I knew little, and didn’t even pause to reflect why they were here. I was aware of the Chinese invasion, but what I’m trying to say is that even when we have our facts right, we might not have considered the reality behind it.

Across Many Mountains is a memoir, written by actor and activist Yangzom Brauen, a Swiss-Tibetan young woman. This book chronicles the lives of three Tibetan women belonging to three different generations, their relationship with Tibet, their homeland, and how their lives revolve around it.

Kunsang is six years old when she lost her mother to food poisoning in old Tibet. There are no doctors, only self-quarantine and prayers. Sonam, Kunsang’s daughter, is six years old when her parents realize it is no longer safe for monks and nuns to stay in Tibet, because the Chinese are destroying their culture, and lives. They travel with a secret group through the treacherous Himalayas for the safety of the land that gave refuge to the Dalai Lama, their guru. Kunsang carries her smaller daughter on her back while her husband Tsering carries their belongings. Little Sonam treks alongside, trying to keep up. Yangzom, Sonam’s daughter, is six when the three women return to old Tibet for the first time, a deeply moving experience for them. 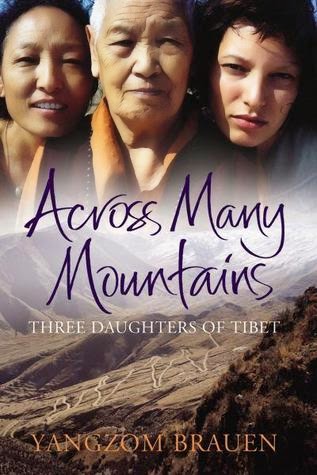 This story does a lot more than talk about a girl, her mother and her grandmother hailing from Tibet. It is an attempt to capture the full magnitude of an event of the past, and how it has affected not just thousands of Tibetans and their future, but also the world. Vivid descriptions of Kunsang’s life as a nun in the high mountains, her beliefs similar to those of her fellow Tibetans, rituals and traditions, and simplistic lifestyles and beliefs make a reader aware of a long-lost world, a world that was real for thousands of people but was crudely wrenched away from them.

Kunsang is a figure of bravery, strength and perseverance. She’s also my favourite person in this book. No matter where life takes her, she has continued believing in her faith. Sonam represents a person who’s always in search of something bigger than herself. Since she left Tibet when she was six, stayed at refugee camps in India and different places like Shimla and Mussoorie, she had grown up trying to find a place to call home. When young Martin Brauen, who had fallen in love with her, wanted to take her and Kunsang to Switzerland, Sonam wanted to buy their own home, a place she could confidently call her very own.

Yangzom’s life was spent learning Swiss German and Tibetan at home, living in a family with mixed cultural values, and finding her family actively participating in peaceful protests for liberation of Tibet. All these early influences, along with a trip to Tibet, influenced her deeply. When she became an actor, she realized that she wanted to do something else too, something that would be meaningful. There was nothing better than dear, old Tibet, so Yangzom found herself leading the Tibetan Youth Association in Europeand anchoring in The Tibet Connection.

The language of the book is simple and easy to comprehend. It might seem a little difficult if you’re completely unacquainted with the culture of Tibet, but it will get better with careful reading. I finished the book on the second attempt, after I had done a bit of research on the Dalai Lama and Tibet for work. It seemed quite simple and very interesting the second time around. If you are keen on learning more about the people who practice Buddhism, or about Tibet and its culture, or simply because you like a good, real-life story, this book will give you a lot to learn and appreciate.

"'Being reincarnated as a human is as rare as gold,' she always says. 'If you are born a human, you must not waste your existence.'"