on February 08, 2015
Popularly known as Manto, this short story writer is one of the greatest, as well as the most controversial, writers of India (shifted to Pakistan after Partition, so became popular as a Pakistani writer). His stories, originally written in Urdu, are simply narrated, having an essence of lyricism, metaphors and deep insight into human nature. This collection of stories has been  carefully translated by Aatish Taseer, and done in a way that is said to have maintained Manto's original style and its effect.

This collection has twelve translated stories, covering a variety of themes including partition, dogmas, women and society, sexuality, politics, and religion. The book begins with the author's introduction, which is a must-read if you are (like me) a first-time reader of Manto's stories, and wish to get an insight into the relationship between his Urdu stories and its translations. He has talked about his own experience and the declining fate of Urdu language. It greatly enhanced my reading experience as it gave a glimpse into Manto's literary life, influences and ideas. I have personally been fascinated with short stories that narrate stories worth telling in a novel, in just a few pages. Those stories have memorable characters, places and habits that come back to you at a later time. Manto's stories have that quality, and a lot more that's hard to describe in words. 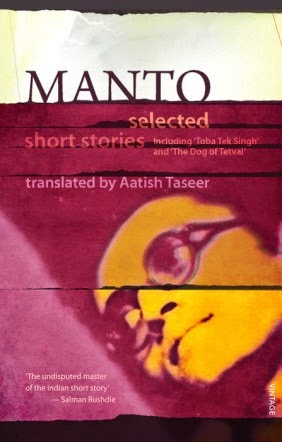 The first story, Toba Tek Singh, is a well-known story. People in an asylum have spent years together in that enclosed space, and have absolutely no idea about what's happening outside. They don't know about the partition or what it means, so when a ridiculous proposition comes for some of the inhabitants to leave the asylum and go to 'India', they're pained by the thought of leaving home. It's the story of a man in the asylum who mutters a distinct string of words ending with random phrases, who cannot find his identity. Imagine my surprise when I mentioned the story's title to my dad, he immediately narrated the distinct phrase used by that man!

Another story that struck me the most was For Freedom, that describes the travails of young blood during the freedom struggle, the hopelessness of politics and what it meant to the common man. Khaled Mian is one story that struck me as intense, cleverly invoking deep and hidden fears in the reader as it implicitly brings out the deep fears (fear of a loved one dying, or coming to harm, for example) in the main character and make him act the way he does. There are other such stories, all of which have been written in simple, yet metaphorical language that you would want to read slowly, word by word, because each word has meaning. This is one of the amazing things that good short stories do. To add to that, the impressive way in which Manto seems to understand human sentiments at the basic level, and is able to narrate those around a gripping, simple story, is sure to make you want to read more of him. That's because he doesn't talk about human sentiments like others, he chooses the most basic ones, and ones that many writers shy away from. He's also true in his stories, for not many have 'happy endings'. He tells a story as it is.

Manto has been called a storyteller of Bombay. That was the city he supposedly loved the most, and wrote about the most. Capturing the essence of the place and the people, he has written numerous stories, a small portion of which have been translated and presented in this collection. Another thing that strikes you is that while India and Pakistan remain bitter about the partition, Manto's stories (as well as those of other writers like Ismat Chughtai and Parveen Talha) evoke the real feeling of loss that real people suffered.

Saadat Hasan Manto has been tried for obscenity in his stories numerous times, but his open acceptance of human nature, choice of equality over orthodoxy, and compelling stories of people who identify themselves as humans, has always won over those issues. These stories are certainly powerful and inspire a reader to think. I admit to not really understanding the real meanings of some stories as they ended, or understanding the meanings of implied language, but that led me to look up Manto on Google, and am I impressed or what! If you'd like to make a foray into Urdu literature, old Indian stories, Manto is a must-read. Some stories are suitable for everyone, while some I would categorize into the mature category.

"What I have learned is that going against nature is in no way, under no circumstance, bravery. It's no achievement to kill yourself through abstinence, or to endure it. To dig your grave and get in it, holding your breath for days, to sleep for months on a bed of sharp nails... - stunts like these would bring neither God nor freedom. And from what I understand, the only reason India is still not free is that we've had too few leaders and too many stuntmen... They've found a politics that stifles truth and goodness of character and it's this same politics that has made the struggle for Independence so blinkered."