Spoiler alert: This is also kind of a summary, not just a review.

They call it dystopian. I feel what Bradbury predicted might not be far from a potential possibility. A haunting tale of a future where 3D, televised 'families' are more important than the people you live with, where firemen are armed with kerosene and matches and light fire in houses where books are reported to be. They cannot remember a time when firemen used to put out fires and people like the young girl Clarisse, who dare to ask questions or spend time to 'think', are considered mad and unsuitable for society. The basic premise is that no one should ever be sad, and for that, everyone has to be ridden of things that make humans sad.

Guy Montag, a fireman with a wife (Mildred) devoted to her TV 'family', meets seventeen year old Clarisse and finds her strange because of the kind of questions she asked and how she made him think about things he hadn't thought about lately. When did he last smile? Was he happy? But soon, it becomes a routine when he meets her every evening for a few minutes as she walks along, an air of wonder and curiosity in her features, something that's so new to Guy that he feels sad just spying on her family next door. One day, he feels something's off and he never sees Clarisse again. Then there was another house reported where the firemen find an old woman clinging to her books, and when she refuses to leave them, Guy looks on horrified as his boss lets her light up her house herself, and dying in that fire inside.

That incident shakes him up and for the first time in years, he's craving for real company, but his wife doesn't understand his sadness and wants to stay with her TV family, his boss seems to know something, to understand this stage in a fireman's life, but is mean about it, the robot dog at the station seems to be growling at him more and more, and he's started hiding books in his own home. Soon enough, he realizes that he cannot live there anymore. There's the war coming and people are to busy driving rashly, staring into 3D people and screens, listening to talks with earpieces permanently stuck in their ears, looking at advertisements constantly running on billboards so people cannot pause to think for themselves. He soon turns into a Wanted man, and makes a run for his life. 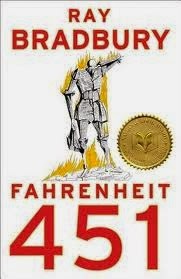 A lot many things happen with Guy in this book, beginning with coming across Clarisse and getting a jolt out of the everyday desensitized living, to being hunted by the whole city and escaping into another world. He realizes he's not alone, but the power of the world overtaken by the craze of keeping everyone from thinking is too much and the rest are too small in number. Yet, they're hopeful. As the frenzied society comes to an end, these men, with memorized books and knowledge, armed with hope and ideas, set to rebuild the society, all of which has been wiped out by war.

With a title that refers to the temperature at which paper burns, Fahrenheit 451 talks about books and censorship (because academic plain texts, I think, and user manuals were allowed) and the power of independent thought and ideas, things people are banned from indulging in. It's a good, short read, well described, although you might feel like it's become stagnant in between. It picks up pace, however, in the later half of the book. It's also been written in a way that made me wonder if there were perhaps printing errors, with phrases repeated, but that's how it is. It leaves the reader to ponder over what is happening even now. What makes me praise this book is the timing and the imagination. This was written in 1953, and what Bradbury imagined then seems much too possible right now. So what if we don't have radios plugged in the ears? We have headphones. We have more screens - LCD, computer, tablets, smartphones, etc - than books. If this situation of an imagined world would shake you up and make you slow down a little, be sure to read this book. If you still have the time to read, that is.

Some quotes from the book:

“Everyone must leave something behind when he dies, my grandfather said. A child or a book or a painting or a house or a wall built or a pair of shoes made. Or a garden planted. Something your hand touched some way so your soul has somewhere to go when you die, and when people look at that tree or that flower you planted, you're there."

“The books are to remind us what asses and fools we are.”

“Do you understand now why books are hated and feared? Because they reveal the pores on the face of life. The comfortable people want only the faces of the full moon, wax, faces without pores, hairless, expressionless.”

“Most of us can't rush around, talk to everyone, know all the cities of the world, we haven't time, money or that many friends. The things you're looking for... are in the world, but the only way the average chap will ever see ninety-nine per cent of them is in a book.”