Review: The Silkworm by Robert Galbraith

Goodreads Blurb!
Private investigator Cormoran Strike returns in a new mystery from Robert Galbraith, author of the #1 international bestseller The Cuckoo's Calling.When novelist Owen Quine goes missing, his wife calls in private detective Cormoran Strike. At first, Mrs. Quine just thinks her husband has gone off by himself for a few days—as he has done before—and she wants Strike to find him and bring him home.But as Strike investigates, it becomes clear that there is more to Quine's disappearance than his wife realizes. The novelist has just completed a manuscript featuring poisonous pen-portraits of almost everyone he knows. If the novel were to be published, it would ruin lives—meaning that there are a lot of people who might want him silenced.When Quine is found brutally murdered under bizarre circumstances, it becomes a race against time to understand the motivation of a ruthless killer, a killer unlike any Strike has encountered before..

My Thoughts!
The Silkworm, the second book in the Cormoran Strike series takes off some time after the first book introduced this ex-army-super-intelligent-guy-now-a-private-detective. Apart from his turbulent relationship with his long-term girlfriend, getting a new assistant, Robin Ellacot, who's been quite an excellent apprentice, the first book, The Cuckoo's Calling, had ended with Strike solving the famous Lula Landry case - a supermodel who apparently jumped to her death, but Strike proved that she was killed. So now with The Silkworm, we see how Strike got all popular because well, Lula Landry was a real big star, and now he's having a long waiting list of clients wanting to avail his services. Robin is busy working out her own priorities, as well as handling Strike's office deftly. Strike is somewhat bored of tailing unfaithful wives and husbands, so when a simple woman, wife of a novelist called Owen Quine, comes to ask him to locate her husband, Strike couldn't refuse. 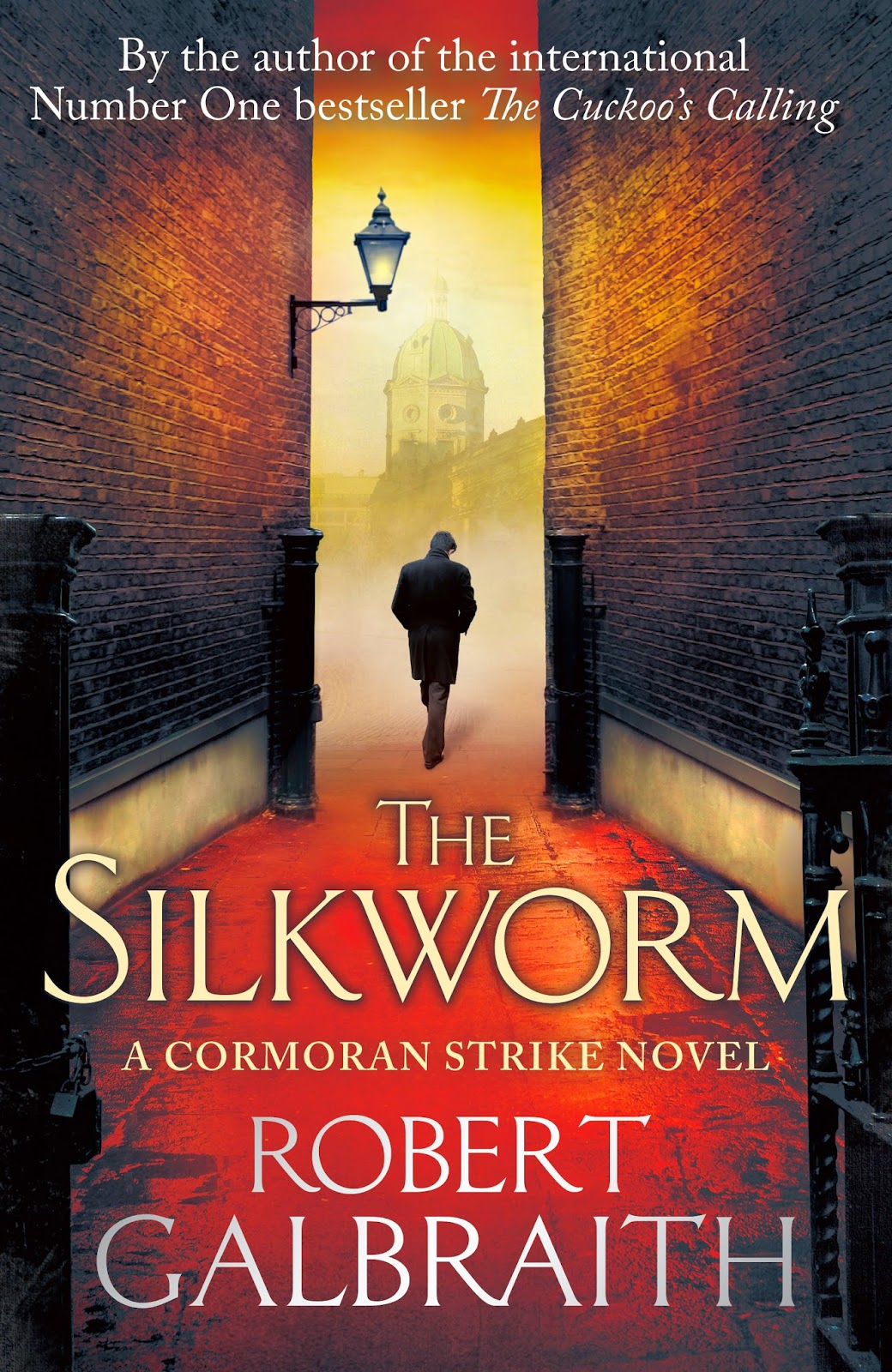 It had to be a simple case. Owen Quine was used to performing such dramatics, running off for days on end, not telling anyone where he's gone. Just this time, his absence was longer than usual and it had upset his wife. Strike finds an overwhelming honesty in Leonora Quine, and sets on solving the mystery, trying to find the real criminal while simultaneously trying to protect Leonora from false accusations from something that you might expect to have happened in a crime novel - Owen Quine was found murdered. And very brutally.

The Silkworm has gruesome detailing, twisted minds, incredible plot, clever detection and a lot more beyond an ordinary crime thriller. It's J.K. Rowling all over again: characters you can't seem to get enough of, moral messages hidden even in the worst of crimes, an acceptance of all sorts of people. The novel explores different themes and situations with the help of intricately developed characters, who're shown reacting to varied situations. The book also talks about 'behind-the-scenes' talk of the publishing industry, often including character traits, metaphors or dialogues pointing to something eye-raising. The mystery is well-woven and unpredictable, making readers throw themselves at different suspicious characters and then being provided teasing clues from time to time, making one question their choice of criminal! Just like in the previous book, I loved the way Strike solves mysteries. It makes one think. True, there's less action, but there's a lot more thought. And I love it!

I did like the ending as well, feeling it was elaborate enough to guarantee understanding, but for someone who wants to do a double-check on any character's actions in the previous pages of the book, it demands a re-read. All things bright and wonderful here, but there is one thing I was slightly put off with. Surprisingly, it's the writing style somewhere in between the book. I couldn't comprehend why it became the way it was, because it was not good. The first book seemed a lot better with respect to how it was narrated. This one needs work. Not the descriptions and all - those were as good as they could be - but something like Strike's thought process. The sentences just seemed off at some parts. Besides that, the book has graphic detailing of gory murder scenes, and let's just say that Owen Quine's novel, because of which he was killed, isn't really a children's book.

Another thing that I really like about this series is that the characters are just so realistic that you can't help thinking of them as real people, and that you're reading a real life story. It makes the story so much more engaging to see Robin and Strike develop themselves as characters, get their own personal lives sorted (or get worse) and really grow as people, just like in real life.

To fulfill your desire for some mind exercise, or a really involving mystery, I'd recommend The Silkworm, but I wouldn't recommend it to younger readers.

Some quotable quotes from the book!

“...writers are a savage breed, Mr. Strike. If you want life-long friendship and selfless camaraderie, join the army and learn to kill. If you want a lifetime of temporary alliances with peers who will glory in your every failure, write novels.”

“We don’t love each other; we love the idea we have of each other. Very few humans understand this or can bear to contemplate it. They have blind faith in their own powers of creation. All love, ultimately, is self-love.”

“Like most writers, I tend to find out what I feel on a subject by writing about it. It is how we interpret the world, how we make sense of it.” <-- ^_^

“You are not writing properly unless someone is bleeding, probably you.”