on January 31, 2014
I've just emerged from the silent, eyes-closed-as-I-replay-the-book phase, before which I went through a pure OHMYGOD-kinda hyperventilation attack! I mean, I mean! Shadow Kiss is the third, and so far my most favorite book in the Vampire Academy series! Is this series awesome or WHAT???? I just don't know how to write a review for this one, so I'll just go along with my fanatic feelings!

Blurb from Goodreads!
It's springtime at St. Vladimir's Academy, and Rose Hathaway is this close to graduation. Since making her first Strigoi kills, Rose hasn't been feeling quite right. She's having dark thoughts, behaving erratically, and worst of all... might be seeing ghosts.As Rose questions her sanity, new complications arise. Lissa has begun experimenting with her magic once more, their enemy Victor Dashkov might be set free, and Rose's forbidden relationship with Dimitri is starting to heat up again. But when a deadly threat no one saw coming changes their entire world, Rose must put her own life on the line - and choose between the two people she loves most.

My Thoughts!
I picked up Shadow Kiss soon after Frostbite, since I had liked it quite well. Did I have any idea this one would do to me what it did? Not a clue. I mean, I was enjoying the story so far, but with this book in, it's become much more than that. Rose is my new favorite, not just another character I admire. Her world is so close to my own! Her problems, seemingly in a parallel universe, coinciding with mine. Her fears, my fears. But it's not just this relation aspect. I love this story for everything that's in it! I'm a sickler for action, and it's got loads of well placed, well written and extremely well plotted action! It's a beautiful book, narrating the story of a world of vampires, but going much deeper than just blood lust!

Writing style? Easy to follow, well written, very well plotted. It's not exactly a maze, but twists come in just when you didn't expect anything, and you can't really predict what'll happen next, unless you've been a spoilsport and read up spoilers on the net (which, I absolutely refused to do!). Although I've been saying the pacing's slow, considering how it's been a few months described in three books so far, but it's just no problem, I realized later. There's so much going on in a short span of time, that the details are more important than going on quickly to the next step. 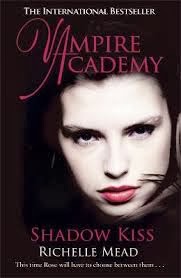 I think the biggest reason I adore this book is that there's so much of emotion! It's not a sickly emo kind of thing, it's just that you don't just see action. There's detail to life, a turmoil of sorts described, to which readers would be able to easily relate. Rose's life was always about keeping them first. She's been living for the Moroi. When will she do something for herself? Is that even possible? We've seen Rose Hathaway, badass novice guardian go through so much, including equally badass Strigoi killings, along with seeing her live her life like a big sacrifice. Have the recent events challenged that? Certainly. Not that Rose is too keen to go off "living her own life". Lissa is who she wants to protect. She wants to be a guardian. She's awesome! But life was never how you thought it was. You feelings can be strong, and events can change you.

The relationship between Rose and Dimitri was just heart-achingly beautiful! It's just so painful reading about such forbidden love, but I respect them both for how they take care of it all. As far as characters go, even Adrian seemed likeable by the end of the book. He didn't seem that bad even in the beginning, but still. He was more of a misunderstood guy who acted obnoxious, but is one with some sense.

I really don't know how I should express my feelings for this story development here. Heart-breaking? Yes. Mind-boggling? Yes. Oh-God-please-don't-let-that-happen!? Yes. "I love Rose and Dimitri!!!!"? Yes. "I wish I had Lissa's power and patience!"? Yes. "What is going on with Rose!! Ghosts? :O " ?? YES! *tears streaming down* reading the ending of the book? Super duper yes.

I don't know if it's just me, but this book goes way deeper than what it seems. I already have misgivings about the movie, it just seems to over-glamorized! This story's way beyond all that! Recommended for: everyone who enjoys Young Adult, Adult fantasy fiction.

Quotes, quotes!
"Some people read books for fun," he observed.
"I don't think reading this cowboy stuff is really saving the world like I do."
"Like any book, it's an escape."

Life and death were so unpredictable. So close to each other. We existed moment to moment, never knowing who would be the next to leave this world.

'She was right about how easily things change. We try to do what's right, or rather, what others say is right. But sometimes, when that goes against who we are....... we have to choose.' <-- this one is my favorite! *_*