(I'd suggest you get a boxed set of this series)

The second book of the Vampire Academy series, Frostbite takes us deeper into the dark, mysterious world of vampires with clans, classes, powers, fighting, magic and love. I took a long time to pick this one up after I finished with the first book less than a year ago. Time constraint, not that I didn't like the book. I loved it, rather. And Frostbite was every ounce as (and more) exciting than how I wished it would be.

Goodreads Blurb!
Rose loves Dimitri, Dimitri might love Tasha, and Mason would die to be with Rose...

It’s winter break at St. Vladimir’s, but Rose is feeling anything but festive. A massive Strigoi attack has put the school on high alert, and now the Academy’s crawling with Guardians—including Rose’s hard-hitting mother, Janine Hathaway. And if hand-to-hand combat with her mom wasn’t bad enough, Rose’s tutor Dimitri has his eye on someone else, her friend Mason’s got a huge crush on her, and Rose keeps getting stuck in Lissa’s head while she’s making out with her boyfriend, Christian! The Strigoi are closing in, and the Academy’s not taking any risks... This year, St. Vlad’s annual holiday ski trip is mandatory.

But the glittering winter landscape and the posh Idaho resort only create the illusion of safety. When three friends run away in an offensive move against the deadly Strigoi, Rose must join forces with Christian to rescue them. But heroism rarely comes without a price...

My Thoughts!
We get further into the story at St. Vladimir's. Rose Hathaway-the protagonist, novice guardian for Lissa Dragomir, the last remaining royal in the Dragomir family, is having serious relationship troubles. She cannot get Dimitri out of her head, and Mason's interested in her. Then there's Tasha Ozera, a royal Moroi and aunt to Christian, Lissa's boyfriend, who seems interested in Dimitri. It seems like the story's revolving around this theme, but thankfully, these relationship troubles are not directly at the center of attention. Strigoi (the 'bad' vampires) are growing and things are changing. There is evidence of them being organized and planning killings, something which was unheard of before. And the Moroi, especially the royals, are in danger. 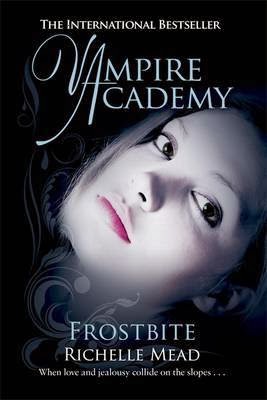 I found the story slightly tiring and not-so-impressive in the beginning, and the writing style preposterous, but that was because it has been narrated from Rose's POV, a dhampir girl who's the perfect definition of 'badass'. She's so not someone I would call ideal as a person, but you'll love her nevertheless. I love this thing about well-written stories and completely defined characters. You love them even if they are going against your beliefs and doing things you'd have thought should be banned! But she is someone who isn't afraid, holds strong opinions and is not scared of voicing them, is determined enough to put up with a lot of practice (apart from Dimitri being there, that is), and capable enough to be able to save all those she loves and cares for, brave enough to do what is her duty.

If reading the book was an experience, I'd say it was because of the book being written from Rose's POV. No other character could have managed to narrate a story about vampires that seems more about high school, but isn't, that seems like a love-twist story but is cleverly written to make you believe it is much more than that. I enjoyed reading this book! A lot! Although once again, I found Lissa's role quite behind herself, but that might just be because one, I'm comparing it to how it was in the previous book and two, she is a princess. It shouldn't surprise me to see she's being treated as one, right? Even with the inactivity, she seems lovable, once again thanks to Rose's POV, who makes everyone she loves look ideal.

Adrian, a new character seemed more like a nuisance than someone intriguing, and his actual role in the story is yet to be seen in the other books. I hope he doesn't disappoint, considering how he's a first-look-negative-influence kind of a person. And finally, Dimitri! Although he seems annoying sometimes, considering how secretive he gets, he is still a hot guardian who just seems, well, hot. And it's about his whole demeanor that makes him appealing. Apart from the action towards the end of the book that made me forget the tiny flaws and give the book a rating of 5/5, it was Dimitri's act in the end! I don't want to include spoilers so I'm staying out of describing it in detail, but it made me go, "Really? I thought he wouldn't! Well, yay!" :P

“There's nothing worse than waiting and not knowing what'll happen to you. Your own imagination can be crueler than any captor.”

“What matters is that someone—that you—know me that well. When a person can see into your soul, it's hard. It forces you to be open. Vulnerable. It's much easier being with someone who's just more of a casual friend.”

“In the real world, you can make your own miracles.”