From the book’s cover!
Anu is a leather wearing, no-nonsense professional guardian with a reputation for killing the most dangerous vampires in New York City. But when her enemies murder the one person she truly cared about, all she wants is vengeance. The only clue points to New Delhi, so Anu puts in for a job transfer. In India, she finds more than she expected. For one thing, her fellow operatives have made a truce with the vampires. For another, it’s way too hot to wear leather.

At first, it seems Anu’s biggest challenge will be evading the nice boys her aunt wants her to marry. But when children start disappearing, she discovers forces older and darker than anything she’s faced before. All of Delhi is in danger, especially the sexy stranger who sets Anu’s pulse racing. To prepare for the coming battle, Anu must overcome her personal demons and put aside years of training. This time, her most powerful weapon will come from her mind, not her weapons belt.
My Thoughts!
What made me apply for this book when it was up at blogadda for review was the fascination I had thinking about a fantasy story, a vampire fantasy no less, by an Indian author! The silhouette of the super-woman-hero on the cover, crouched atop a roof, keeping a steady lookout was intriguing enough. I supposed it would be a story about guardians hunting down vampires, battling and biting in the sneaky corners of dusty lanes. It seemed like it would actually be like that, considering the way the story started, mysterious happenings, feelings for vengeance and all, but turns out it was best only in the beginning, after which it began to lose focus. Or maybe the focus was supposed to be on all the hocus pocus, considering the title. That was confusing. Vampires or tantra? Because both together do not seem to fuse and that was what happened in the book. 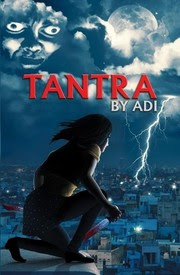 Initially, the book had me engrossed. I liked the way Anu is shown as super-talented and how she’s able to defy normal hunters’ limitations and have her own. I liked the mystery surrounding it all, I liked just the idea of vampires and hunters in New Delhi! I thought it was innovative, a good experiment on the part of the author, to venture into topics Indian authors generally don’t get into. It wasn’t predictable, I have to give it that much credit. As a curious reader I tend to anticipate and guess the future events, but this didn’t seem possible over here. Either it was because it left me confused, what with the story doing a round-about , leaving vampires in the background and getting fused with tantra, or the fact that it actually had scope and the ability to surprise!  It left something to the imagination, at least. That’s what I think is good.

Next, the book was successful in involving me in the story, having a sense of dread when the villain, Baba Senaka (the evil-guy-who-uses-his-tantric-knowledge-to-rise-to-power-and-achieve-greatness, and who seemed just like Voldemort to me, having a decent fan following and converting vampires to do his bidding, making the vampire society fall apart) did something sinister, such as appearing in Anu’s drawing room. Yep, I shuddered almost all times he appeared. I wouldn’t say much on the characters as I was slightly disappointed with the choice of names. I understand that might be done deliberately, to keep the focus on the story, but sorry, names are important. They help readers connect with them, which was hugely missing. The fact that the characters were shown as super richie brats who only visited five star places for coffee, didn’t help much either, more so because it seemed overdone.

That’s the biggest problem with this book. It’s a very good first-attempt-at-a-novel kind of a book and I really enjoyed getting to know all about sattvic and tantric styles, the mind-spirit-soul thing and how it actually has stuff like shifting, but I feel almost everything seemed overdone. Anu was special, but then became a prodigy at everything, Nina and Smiti seemed pestering, but cute. Even then, they became “too much” to handle. Tantra and rituals were interesting, the astras and mysterious speedy fights, but in the second half of the book, became overpowering. I did not want to read more. I felt I was reading something like The Krishna Key, I lost focus a lot of times. Senaka seemed to go down easily (not really, as most of the book was focused on preparing Anu to fight against him, but in the grand finale, it was almost like a slightly extended “poof”), there were too many deaths (always a turn off) and I also found some grammar errors (personal problem with grammar errors).

Another point that came to mind was, there were those fantastical terms, like shifting, guardians, etc, about which readers might not know, especially those who haven’t read a vampire story before. There seemed to be some attempt at humor, but in some places it was in bad taste and in some places it just didn’t make me smile. I did not like the ending. It made me o.O what? You crazy or what? Now there’s the next book in the series to look forward to.

I’d recommend it to young adults, especially those willing to experiment with their reading. It’s something new (maybe the fusion didn’t work out, but still. It’s an applaud-able attempt at least) and you might like the tantric mantras thing more than I did.

This review is a part of the biggest Book Review Program for Indian Bloggers. Participate now to get free books!