Review: A Step from Heaven


With such a cute-looking little girl on the cover, who can possibly miss this book? I usually pick up books with interesting covers/names, so A Step from Heaven came right into my bag while I was browsing in the library. These days I'm being so lucky in getting my hands on great books! Seriously! A Step from Heaven is a beautiful story of transformation, adjusting to a new culture and a way of life, dealing with domestic problems, all told from the perspective of a child, Park Young Ju.

From the book's cover
When four year old Young Ju Park first hears the words Mi Gook- Korean for 'America'- she is sure that they mean "Heaven". But when her family moves to Southern California the following year, she finds the transition from life in Korea far from easy. The countless unexpected challenges facing the Parks- from learning English, to finding work, to attending school- start to splinter the family's fragile construction. Soon they are simply four people in one house who put on a front for outsiders. Still, as Young Ju grows from child to adolescent in her new home she finds a surprising new voice- neither purely Korean nor American, but uniquely her own- which allows her to speak the truth that no one else in her family dares to say.

My Thoughts
I usually love books with kids as protagonists, it's so interesting to see the world from their point of view, how they see limitless possibilities and the innocence with which they perceive things. When the story begins, Young Ju is four years old and lives in Korea with her family, her Uhmma (mother), Apa (father) and Halmoni (grandmother). She notices a certain excitement in her parents when they talk about 'Mi Gook', which Young Ju thinks must be heaven. What else could have so many possibilities and promises, that made her parents so happy? When she's told they'll be moving to Mi Gook, she thinks they're going to heaven. 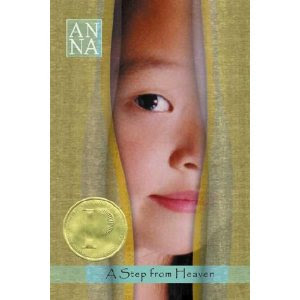 Mi Gook is the Korean word for 'America' and the story kicks off when this family of three arrives in the US, with Young Ju now having terrible curls to look American. She certainly doesn't like the place much and wonders why they haven't reached heaven yet. Now she has a new baby brother, Park Joon Ho. The way she thinks of everything that's happening and all that she couldn't understand, is very well written. How she feels sad when she sees her Apa loving and cooing to Joon so much (whom she refers to as 'worm'), while her Uhmma tells everyone how he never even picked up Young as a baby. How she feels when he makes great expectations from Joon, but nothing from Young?

As years pass, the family faces a lot of problems, money crunch, the father turning alcoholic and abusing his wife and children at home, a Korean family's hard struggle to live a life in America, which is certainly not how they envisaged it would be. The first chapters are written with extremely small sentences to completely show it from a four year old's perspective. The sentences grow longer and opinions and facts clearer, as Young Ju grows up. Needless to say, I love the way it's been written. It's different, breaks the norms of 'descriptive' long sentences, but still is amazing! I mean, this is one book where the author succeeds in conveying a whole picture, describing everything, with limited words. Also, there is no use of quotation marks all through the book, but we still know what anyone said, it's written that way. :)

The issues addressed range from domestic problems, children's adjustment to a new place, poor family ties, teenage issues, but they all revolve around this family and all its aspects. Young's father is shown as a bad character, yet you understand what his problem is, he used to be a good man, someone who taught his daughter to rise on waves, who laughed and loved. However, in America, he has trouble understanding English and does odd jobs, and even with his wife's earnings they don't manage to make a house, which makes him the depressed and abusive man he became. During all this, readers see and 'feel' the transition of a family that used to be something else being turned into something that isn't very pleasant. When Young starts college, there's hope for the future (I won't reveal what happened!) and the book ends on that hopeful note.

Apart from striking an emotional chord and the uniquely wonderful way it's written, the book also explores the various facets of Korea and its culture. How boys are generally more loved, how kids are submissive and not supposed to question their parents, the way their names are formed and pronounced (they use surnames first and given names second) and many other things! I'm generally interested in different cultures these days, so I enjoyed reading this and knowing about Korea through such a heart-moving story. By the way, this book is partly based on the author's life as well. She was born in Korea and then migrated to California, US. Click on the author's name at the beginning of this post to know more about her.

Just a few lines towards the end of the book that talk about what Young's mother wished for when she saw a future in America.

Uhmma said her hands were her life. But for us, she only wished to see our hands holding books. You must use this, she said and pointed to her mind. Uhmma's hands worked hard to make sure our hands would not resemble hers.