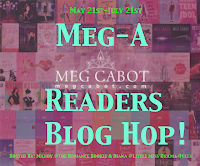 This review is a part of the Meg-a-Reader's Blog hop hosted by Mandy at The Romance Bookie and Diana at Little Miss Drama Queen where Meg Cabot fans unite and take turns to do a special, related feature on our blogs!  This is my second feature, the first one being review of Underworld. I had initially planned on doing something else, but with crazy amounts of college work, I can only review Size 12 is Not Fat, the first book in the Heather Wells series, which I've re-read recently.

I'm generally a mystery lover, I love books that deal with solving mysteries and crimes, and when it's Meg Cabot writing a book based on that, you can be sure it'd be fun mixed with suspense! I usually don't enjoy chick-lit that much, but Meg Cabot books are the only exception. I love the flow of her writing, so easy and conversational, you could read them in a go! I discovered the Heather Wells books about 2 years ago and have read all three previously released books. Now, the fourth book in the series, Size 12 and Ready to Rock has been released on July 10, 2012. :) 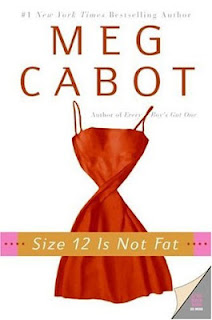 Or, at least, she did. That was before she left the pop-idol life behind after she gained a dress size or two — and lost a boyfriend, a recording contract, and her life savings (when Mom took the money and ran off to Argentina). Now that the glamour and glory days of endless mall appearances are in the past, Heather's perfectly happy with her new size 12 shape (the average for the American woman!) and her new job as an assistant dorm director at one of New York's top colleges. That is, until the dead body of a female student from Heather's residence hall is discovered at the bottom of an elevator shaft.

The cops and the college president are ready to chalk the death off as an accident, the result of reckless youthful mischief. But Heather knows teenage girls . . . and girls do not elevator surf. Yet no one wants to listen — not the police, her colleagues, or the P.I. who owns the brownstone where she lives — even when more students start turning up dead in equally ordinary and subtly sinister ways. So Heather makes the decision to take on yet another new career: as spunky girl detective!

But her new job comes with few benefits, no cheering crowds, and lots of liabilities, some of them potentially fatal. And nothing ticks off a killer more than a portly ex-pop star who's sticking her nose where it doesn't belong .

My thoughts
Welllll, sometimes I'm at a loss for words when it comes to reviewing a book I found really good. It's happening again. Size 12 is Not Fat is very entertaining. You'd think what could possibly go wrong in a residence hall for students in New York city, most of all with Heather, who's been a teenage pop star and gets people wondering if "they've seen her before", now in her 30s and working as assistant director at Fischer Hall. As the story begins, we're introduced to Heather's pet peeve, that Size 12, which is her size, is the size of the average American woman and those who think it's fat, are well, wrong. What's wrong with loving ice cream and soda?

The plot begins to get interesting when there's a death in the dormitory residence hall (as Heather keeps reminding us) and Heather has a feeling that it can't be accidental. People are convinced it was because the deceased was elevator surfing, but Heather knows teenagers. Girls like the one who died don't do silly stuff like elevator surfing, that too all on their own. When there's a second girl dying in a similar fashion, Heather wants to investigate. She seeks Cooper's help (who's her ex's brother and whom she fantasizes about), but he's not too willing to let Heather get involved. They do a little snooping anyway and discover a similar trend in the deaths of the two girls. Cooper's convinced they must let the police do their work, but Heather 'feels' a responsibility towards her residence hall and its people.

Heather is a likable woman, especially with all her funny thoughts about every single thing, about Cooper, about different people, which adds a lot of lightness to the story. That's what I probably like best, I guess. More than the plot and the way she uncovers the secrets, it's the manner in which it's all written. Filled with humor, in first person, Heather's comments about everything, it adds another dimension to it all. That's what makes the book 'unputdownable'! Cooper is a mysterious character, but the way Heather loves him, it automatically makes readers believe he's an amazing person. I mean, considering how I've always loved mystery and at some point of time, wanted to be a detective too, Cooper seems so adorable, with all his private investigation work!

I enjoyed the chemistry between Heather and Cooper. Okay, it was heavily one-sided, but you can't help wish they'd get together soon, and show that Jordan Cartwright what he's lost! I also loved the twists towards the end, the different kinds of kids and practices that they do, what they feel and how things really work. Even if you're reading fiction, there's always some element of truth involved. Though I have to say it was kind of scary at the end when things started heating up. Wonderfully written! And the descriptive aspect is great too, apart from the plot being unpredictable, which is among the best things a book can have! Once you read this book, you couldn't wouldn't stop yourself from getting the next books in the series, Size 14 is Not Fat Either, Big Boned, and the latest release, Size 12 and Ready to Rock!