Price: Rs. 295 (discounted to Rs. 221 At Flipkart)/
$ 9.80 at Amazon
Publisher: Scholastic
Published in: 2010
Pages: 390
Mockingjay is the third and final book in The Hunger Games trilogy, continuing the story of futuristic Panem and its people ruled by the harsh Capitol. This is one series I truly loved to read; it’s written so well that I couldn’t-just-stop-until-I-read-all-three-books! The basis of Mockingjay is the war that’s brewing between the districts and the power hungry Capitol. Katniss is ready to play her part as the Mockingjay, to act as the symbol of rebellion to bring all districts on their side.....
From the Book cover
Katniss Everdeen, girl on fire, has survived, even though her home has been destroyed. Gale has escaped. Katniss's family is safe. Peeta has been captured by the Capitol. District 13 really does exist. There are rebels. There are new leaders. A revolution is unfolding.
It is by design that Katniss was rescued from the arena in the cruel and haunting Quarter Quell, and it is by design that she has long been part of the revolution without knowing it. District 13 has come out of the shadows and is plotting to overthrow the Capitol. Everyone, it seems, has had a hand in the carefully laid plans- except Katniss.
The success of the rebellion hinges on Katniss's willingness to be a pawn, to accept responsibility for countless lives, and to change the course of the future of Panem. To do this, she must put aside her feelings of anger and distrust. She must become the rebels' Mockingjay- no matter what the personal cost.
My Thoughts
Mockingjay is a book that’s fast-paced throughout. Since it mostly talks about the rebellion, there’s action everywhere: in District 13, in other districts, in the Capitol and that’s what makes this one maybe slightly different from the other two. Not that there wasn’t any action in the first two books, but that it was in plenty in Mockingjay, so that there was hardly any page going by without something happening! It might have been a put off for some readers, but because of so many things happening, I couldn’t put it down, being the action lover that I am!
Katniss is as strong as ever, just this time she’s accepted herself as the Mockingjay and understands her importance in the rebellion. I like that power that’s inside her, evident from the way she thinks and the way she acts, a strong force internal to her. There are some new characters into the story, mostly those who play an important part in helping Katniss and the rebellion in their favour and it was kind of interesting to see some people other than the regular characters. Peeta’s sad state gets kind of scary when we learn about the technique the Capitol people used on him, shocking it was and sent shudders through me. I seriously was afraid of the outcome (though I knew of course, it would be fine towards the end, or how else could the story make any sense, but still). Though, sometimes it seemed like a pain, dragging him along to the Capitol when he wasn’t totally sane yet, because he was there before and could help the others get into President Snow’s mansion; but also at the same time, gives a perspective of Haymitch’s mind and his mysterious strategies. And yes, Haymitch! No alcohol permitted in District 13, so he was usually grouchy about that fact, but otherwise is alert and “in action” throughout, which was good. I was bored reading about him being drunk and lost most of the time. 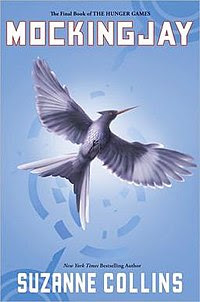 Overall, almost all characters are alive and very much have a role to consider for themselves: Katniss and her family, Gale, Peeta, Haymitch, Plutarch, Snow, Coin, Beetee (who turns out to be the wire meddling genius doing tricks to the Capitol’s system!), Johanna, Finnick and everyone who could survive the Quarter Quell. Though there’s a lot going on during their preparations, the action speeds up when the force reaches the Capitol, where there are dangers at every corner, literally! It could be a bit tiring, reading all that action in a go.
Even though it kept me hooked onto it till the end, there were a few things that were disappointing. Like there’s a lot of misery, darkness hovering all around and deaths, one of which I really didn’t want to happen and which made me really mad. Then there was the unsatisfactory ending. On second thoughts, maybe I wouldn’t call it unsatisfactory, but it could have been made better with some more explanation. It ended abruptly, with all closings cramped into a few pages. There are many questions in the reader’s mind, not only about what finally happened to the main characters, but to the other, small ones too. When those questions are unanswered, it can be disappointing, like it was in this case (though I quite liked the small epilogue :) ). There are just a few words that explain why Katniss finally chose the person she decided to be with, at the end, and those words were just beautiful!
“What I need is the dandelion in the spring. The bright yellow that means rebirth instead of destruction. The promise that life can go on, no matter how bad our losses. That it can be good again.”
Recommended for: Young Adult readers, dystopian lovers and those who like lots of action!
My rating: 4/5
Author- Suzanne Collins Dystopian Young Adult