The Star of Kazan

Written by: Eva Ibbotson
Price: Rs. 299
Publisher: Macmillan UK
One of my absolute favorites!!! A perfect blend of exceptional story telling, relationships, children's view of the world, knowledge and emotions! This was the book that ignited my love for Eva Ibbotson, a famed author for writings for children.
Storyline
The story is set in the beautiful city of Vienna in Austria, which is very well known for music (Mozart, Schubert, Beethoven, Strauss, all have lived and composed there!!), the Spanish Riding School and the Prater (a ground famous for the then world's largest giant wheel).
In a cozy home lived three professors, two brothers and a sister, unmarried and being taken care of by two women, Ellie and Sigrid. These two women find an abandoned baby girl in a church in Dorfelspitze, on the outskirts of Vienna. The circumstances make them keep the baby and they bring her up as their own child.
Annika (I just love this name!) lived in the servant's quarters in the professors' home along with Ellie and Sigrid. She was twelve but extremely talented and loved by all. She could cook like a professional, thanks to the women's training. People in the square loved her, she had great friends and she dreamed- a lot. Dreamed about her mother, visualizing a royal blood woman claiming to be her mother. Until one day it happens.
Annika had striked a wonderful friendship with an extremely old woman in the opposite house, whose family didn't care for her. She had shared her life story with Annika and left her devastated when she passed away, but also left her old trunk to her in her will, of which Annika didn't have a clue. 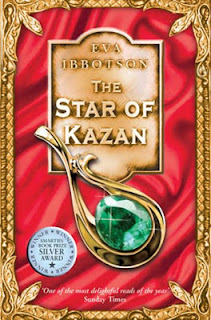 Anyway, one day she finds an autocratic woman, dressed royally, asking for her. Amidst tears of happiness and parting, Annika leaves with her Mother for her new home- a grand castle-like home, Spittal in Germany. However, Annika finds it weird when valuable stuff is taken out regularly and doesn't come back. She's not allowed to clean or enter the kitchen (she's a von Tannenberg, after all), but she somehow manages it and makes friends (read Zed, a stable boy). It's a twisted story that follows, with surprising turns and events that will definitely race up your heartbeat! What does Annika's mother want? She sent her away to a prison-kind of school, with no way to contact anyone.
She is however rescued by her friends from Vienna, who suspected something wrong. They come to know that the trunk that the old lady left Annika had REAL gems and jewelry. (The Star of Kazan is one famous jewel). What follows is a series of events that leave us breathless, as the mystery gradually unfolds and Annika is in danger! She was 'adopted' because the Von Tannenbergs knew of her recent 'inheritance'. They were going bankrupt and their legacy was in danger unless they pay back all their dues, so they decided to use a foundling and claimed to be her family. It all ends happily though. Annika's back to her real home, she has the possession of her treasure, which she uses to help her friends financially, the wicked lady's caught and imprisoned.
What's special
The whole book, I would say. Perfect descriptions of beautiful places, so that the reader is actually transferred to the places and can really "experience" the stuff that happens.  The reader gets infused with the ancient world and life in Vienna, the grandiose and royal descriptions and the wonderful life! The basis on which the story's made is so touching and heart rending that you might even have real tears in your eyes. It gives out the message of the pureness of a child's heart, of real friendships, of love, care and braveness in the face of adversity. Lovely and a must-must recommended book to the young people!
You MUST read this at least once! You'll definitely love it! :D
Author- Eva Ibbotson Fiction My favorites Young Teens