A fantastic book for teens by Meg Cabot! She's an awesome writer and one great inspiration for me! She never fails to impress her readers and it’s no surprise that her latest book ‘Abandon’ from The Abandon Trilogy is pretty impressive.

Storyline
If you loved Twilight and like reading eccentric plots, chances are, you’ll love this. It’s another young adult book, with a teenage female protagonist yet again. Based on the famous Greek myth of Hades and Persephone (complete with mythical characters) , this is a story of seventeen year old Pierce Oliviera who knows what it is like to die. Yes, she’s ‘been there, done that’. Her NDE (near-death-experience) turns her life around. After she returns back, people pester her to describe what she saw when she was knocked out- since most people who have NDEs say they saw a white light; but not Pierce. While she struggles to ramble off a satisfactory explanation, she is hiding an uneasy truth- what she actually witnessed, or rather, experienced, was nowhere near a white light! She had been to the other side of the world- the Underworld. And it was not at all pleasant. (Cool description of the place though. Completely picturesque) 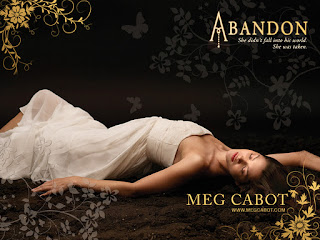 After the “incident” her grades plummet downwards and her mother decides to move to her homeland- the Floridian island, Isla Huesos. A new life and a new place do nothing to reduce her uneasiness. She knows she will be looked for after her escape, and sure enough, HE finds her. Read on as John Hayden, the ‘death-man’ from the Underworld traces Pierce – as a savior and captor, both! What follows is a breath-taking series of events as Pierce constantly finds herself in dangerous situations and John appearing to protect her each time. (It's spooky if you wonder HOW he finds her every time??)

While his enemies, the Furies, are bent on taking their revenge on John, Pierce stands in danger.
The thing I liked the most was the portrayal of Pierce as a strong-willed energetic teen, who has the guts to take on life as it comes. The book's filled with the mystery of the death-man John, the old man at the cemetery and Pierce’s Grandma, who loves knitting scarves for her granddaughter; scarves that play a role in her experiencing the NDE! Gosh! Meg Cabot always gives a totally different picture of Grandmas!

The Grandma's sinister plan hadn’t worked with Pierce’s mom and it would have to be Pierce who will complete the task. This is a gripping tale of the Underworld and the mortal world woven closely together. Follow Pierce as she tries to struggle with the dangers of the Furies and John trying to protect her. It isn’t as simple a story as it seems. More dangers are lurking and it won’t be long before the Furies get free and take charge over John and the island of Isla Huesos.

What's different
The unique characteristic is the way it’s been told – full of suspense, taking the reader back and forth, as the mystery gradually unravels and truth and realization spurts out. I found the style of writing slightly different from her other books; this book keeps you on tenterhooks, trying to understand what’s happening while half of the story is untold. It keeps you guessing until you reach the end!

I found myself pondering over these questions- What eventually will happen? Will Pierce fall into the Underworld yet again? Or will she, with sheer will power, intellect and strength and maybe John’s support, make everything work for her? The answer lies in ‘Underworld’, the second book in the trilogy, due to release this year.

If you are patient enough to wait for the truth till the end and enjoy paranormal stuff, you should happily pick up this book! And like me, wait for the next one!!!